We use cookies to provide you with a better experience. By continuing to browse the site you are agreeing to our use of cookies in accordance with our Cookie Policy.
Home » Starbucks makes a splash with Princi

Starbucks makes a splash with Princi

In 1986, Rocco Princi opened his eponymous boutique bakery and café in Milan at the historic Piazzale Istria. It was a feast for the senses, with crispy round loaves of sourdough bread leaning in rows, baskets of ciabatta bread alongside jars of olive oil and bins of flour. Princi uses the term “Spirito di Milano,” the essence and energy of Milan, to capture the feeling from that first bakery, and infuses it into everything he creates.

Over the next three decades Princi built a legacy, expanding to five more locations across Milan and London. In 2016, Starbucks became an investor and global licensee of the business and opened the first Princi location in the US inside the Starbucks Reserve Roastery in Seattle, where his artisanal baked goods are served alongside the freshly roasted small-lot Starbucks Reserve coffees.

Now, the first Princi standalone store in the US is opening in the north end of downtown Seattle on Westlake at 9th Avenue. Starbucks’ store design team worked closely with Rocco Princi and his team to design the new location. 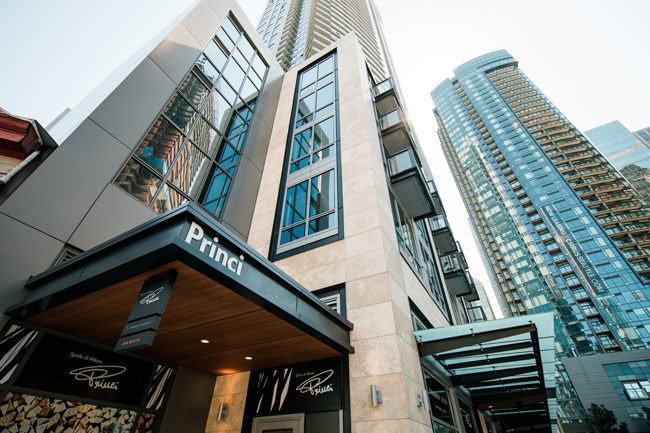 “When you first walk into a Princi bakery, you’re suddenly hit by the energy, the theater, the smell,” says Christian Davies, Starbucks vice president, Creative Global Design & Innovation. “Your first impression is the abundance and seduction of food. That’s what we’re trying to create with a distinctly Italian look and feel to bring that passion to life.”

Davies and the design team took inspiration from Princi’s original Milan bakery and the nearby Starbucks Reserve Roastery, using natural materials and earth-colored stone. In every element of the space, the team tried to express Princi’s commitment to craftsmanship, from the hand-blown glass light fixtures to the hand-rubbed plaster on the walls.

“We kept the palate neutral. The food becomes a ribbon of color and light that ties the whole space together,” Davies says.

The oven is the centerpiece of the space, with fresh baking onsite throughout the day. A brightly-lit food case stretches along the width of the space, enough for a visual landscape of freshly baked cornetti, brioche and focaccia, pizzas and desserts. Commessas, Italian for “shop assistant,” act as a guide through the journey of food.

“We wanted to make sure every one of these elements is created with the same level of detail that Rocco puts into his food,” Davies says. 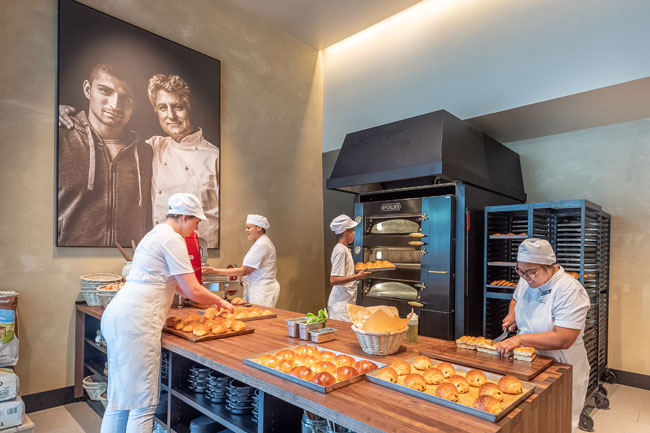 The new store features the full Princi menu of artisanal baked goods, prepared with the highest quality ingredients sourced from Italy to Seattle, starting at breakfast with steel-cut oats with Italian jam, baked eggs in a spicy tomato sauce and cornetti sandwiches made with prosciutto cotto and fontina.

At lunchtime, the menu offers soups, salads, focaccia sandwiches, pizza, and hot entrees. Afternoons expand to a wider selection of Italian cakes, tarts and other desserts. Starbucks Reserve Princi Blend is the signature coffee offering, along with handcrafted espresso beverages made on a manual espresso machine. As the day fades in the afternoon, Bar Mixato offers traditional Italian aperitivo, including cocktails, beer, wine and spirits accompanied by complimentary small plates. Customers can relax on the patio, which will open up to a planned new city park later this year. The smell of rosemary from nearby plantings evokes the hills of southern Italy where Princi’s journey began.

“When you go to Italy, you’ll always find people on the patio,” Davies says. “I hope customers will come here and find the spirit of Milan.”

The standalone Princi store makes Seattle the first city in the world to offer the full suite of experiences from Starbucks Siren Retail business, dedicated to its premium Reserve brand, which includes a Reserve Roastery, a Reserve store, Starbucks stores with a Reserve coffee bar, and now Princi stand-alone stores. Additional standalone Princi locations are expected to open this fall in Chicago and New York. 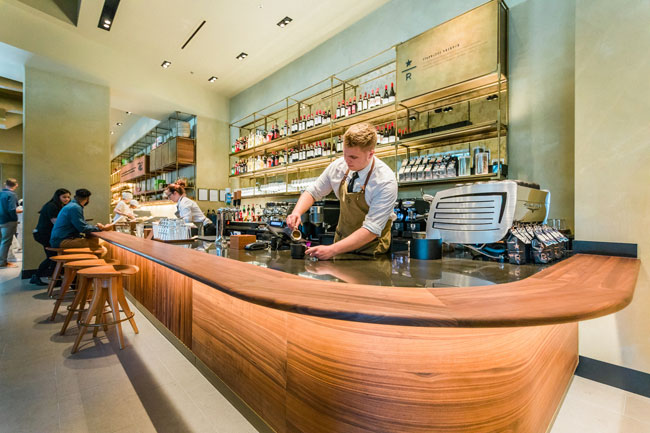 “Over 40 years ago Starbucks set the standard for the third place experience and at the time it was unprecedented, giving our customers a place to connect with each other in new ways. Today marks another significant milestone as we have taken everything we have learned from our highly successful Roasteries, the relevancy of the third place and the overwhelming reception of freshly baked Princi food to an environment that will re-define customer connection and continue to serve as a halo to the rest of the business,” says Howard Schultz, Starbucks’ executive chairman.

The Reserve store is open to the public on the main floor of the building that houses Starbucks headquarters in the SoDo neighborhood of Seattle. There, customers experience the full beverage menu available at the Seattle Reserve Roastery, but with a few new items including Nitro Draft Latte and Spiced Ginger Cold Brew on tap as well as new espresso drinks such as the Bianco Mocha.

Designed in an open, marketplace style, customers can engage with and order from partners (employees) at the Princi counter or Reserve coffee bar, then gather with family and friends at community tables or lounge areas around two fireplaces. On view is the Princi kitchen where customers can see breads and pastries being made and fresh ingredients prepared daily.

“While our roasteries are designed to be bold, educational environments, our Reserve store takes the best of coffee craft as well as artisan baking and layers in a marketplace-style customer experience creating a space that has both energy and moments of intimacy” says Liz Muller, senior vice president, Creative, Global Design & Innovation.