We use cookies to provide you with a better experience. By continuing to browse the site you are agreeing to our use of cookies in accordance with our Cookie Policy.
Home » The Cake Lady: Bakery owner Diane White shares a story of hardship and inspiration

Less than 20 miles from the neighborhood where she grew up in Ferndale, Maryland, Diane White runs her own bakery that pays the bills for herself and the 16 employees who come to work at Kake Korner every day to add a little sunshine to the lives of the hardworking people of Laurel, Maryland, just south of Baltimore.

From the age of 2, White remembers her mom calling her “little miss independent.” So, is it any wonder she wound up a small business entrepreneur? She caught the bug for making money off cakes while as a kid, baking Bundt cakes and selling raffle tickets around the neighborhood. Her mom — “she was the pusher,” White says — encouraged this endeavor by agreeing to match the money her children raised dollar for dollar.

“If we made $30, she’d give us $30. We’d use that for Christmas presents,” recalls White, who is affectionally known today as The Cake Lady. “I really took to baking. Selling those Bundt cakes got me started.”

But soon her life nearly unraveled.

She was pregnant at 16. She married a physically abusive man. “I almost lost my life,” White says matter-of-factly, explaining how she learned to hide pain because of experiences from her childhood. “I left the house with my daughter and a laundry basket. My mom told me, ‘You made your bed, now lie in it.’ I was basically homeless.”

As a single mom from the ages of 22 to 27, White busted her tail working two jobs: running the ARA Services cafeteria from 5 a.m. to 3 p.m., followed by a quick change of clothes and off to work as a Holiday Inn waitress, pulling the 6 p.m. to midnight shift five days a week. She was back in Glen Burnie, Maryland, and baked cakes whenever she found time. There was little of it. 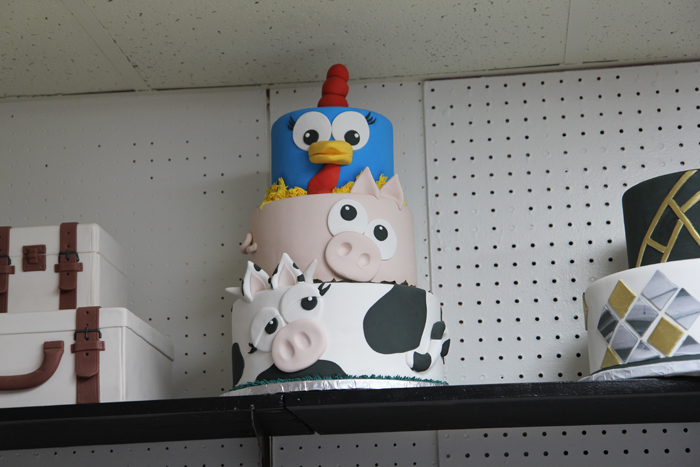 “I was falling asleep at the register at work,” she says. People told her they thought she had narcolepsy. Nope. White was exhausted to the bone.

Some people measure their lives by the distances they have traveled, while others by the pain they have endured and overcome. This is the stark, yet hopeful lesson The Cake Lady wants to share.

She is writing a book on her story with her good friend Linda Richardson, a retired school professional. White speaks at schools and tells young girls to never give up. In her own way, she is part of the Me Too Movement, a strong survivor.

In talks with others, White shares the bad (she says she was sexually abused as a child by a neighbor babysitter) with the good (she took a leap of faith in 2003 when she bought the Kake Korner and turned the business around into one of the most successful retail bakeries in Maryland). “By the grace of God, it’s worked out,” she says. “Be helpful and make things better. That’s my passion.”

Her motto is, “If it’s gonna be, it’s up to me.” As a tremendous honor, White’s Kake Korner was selected in November as the first prize winner in the 2018 Flavor Right Icing Funds Contest. The grand prize money is $10,000. 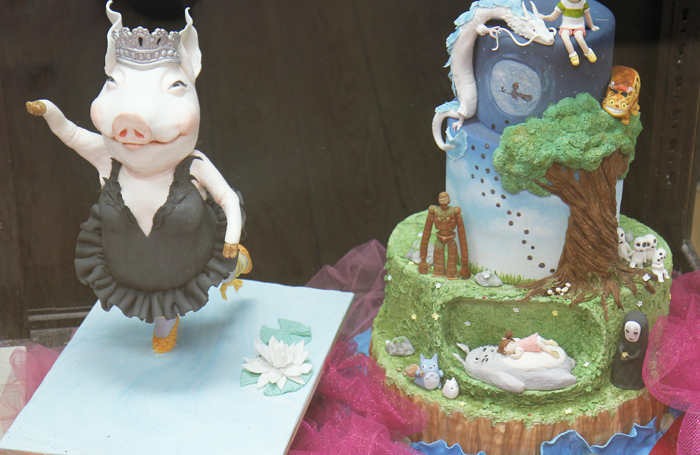 Participants are invited to share their bakery story, including “What inspired you to get started in the bakery business and what do you love most about your work? What’s the hardest part of running a bakery and what challenges have you overcome?” Entries are then judged by a panel on a large scale of various criteria. Flavor Right takes the winners with the highest score and awards their bakery a check. In the 2018 contest, there were five second-prize winners who each received $2,000.

White, who plans to use the $10,000 first prize to renovate her cake shop, is thrilled and humbled about the award. “This is a huge honor for me, and very humbling,” she says. “There are a lot of things we are going to get to do to make this business better. But the only reason I shared my story is that hopefully it will inspire somebody. I believed that my story could inspire other people.”

White had not even reached the age of 18 when she had a baby, a husband and a load of responsibility on her shoulders. Funny thing is, she can still remember the wedding cake. “I made my own,” she says with a laugh. “It was a three-tier yellow cake with buttercreme frosting.”

One motivational moment occurred at a birthday party when she saw a clown cake, made by her sister-in-law, that was amazing in detail. She wanted to try her hand at piping. “I started doing cakes for my daughter, family and schools, and I played with the icing recipe to make it better. I added a lot of different ingredients to make it my own. Then everybody wanted me to bake their cake. My decorating skills were self-taught. They did not have YouTube back then.” 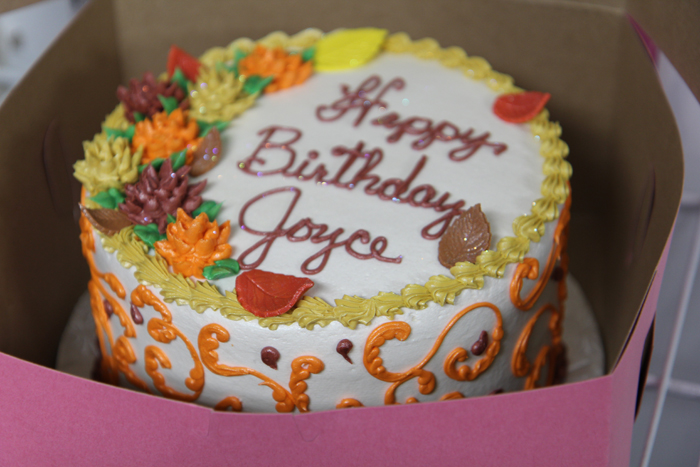 Later, life took a turn for the better after her near meltdown from work exhaustion when she met a nice man who worked as a chef. They started dating. Their relationship got serious. “We saved enough money to buy a house in 1988. I was 28 and working at the ARA Services cafeteria, and he worked two jobs. We actually got married in between jobs.’”

About a year later, White was pregnant with her second daughter and, after she was born, started a bridal consulting and cake business. But as life would have it, according to White, her second husband suffered anxiety from mounting responsibilities and turned to drugs. The money he spent drained their savings account. His car was repossessed; he lost his job. “He told me there were people who were going to attack him,” White says. “My safety was at risk and at this point I had to make a decision. My second daughter was 4, and my heart was breaking.”

White walked away, kept the house in the divorce, and turned to one thing in work that she was really good at — making cakes. While raising her daughter, she worked as a cake decorator at a supermarket, decorated cakes for an ice cream shop, taught as a substitute teacher, baked cakes before and after daycare, and delivered cakes on Sundays.

“I’d be up at 4 in the morning baking cakes,” she says. “It was a good time but a very hard time. I received no child support, although my second husband did get clean and started helping out. I had a 20-quart mixer in my dining room and two baking racks in my house. Then I started adding up the cost of ingredients and my time, and I wasn’t making a dime. That’s when I learned that God always sends somebody to tell you what to do.”

That somebody, actually, proved to be a bakery up for sale. The Kake Korner had been around for decades, a well-liked neighborhood bakery that had come upon hard times. The owner was looking to sell. It was 2003, White was 43 years old with a steady job, but with a burning passion to make something better for her life and her family. 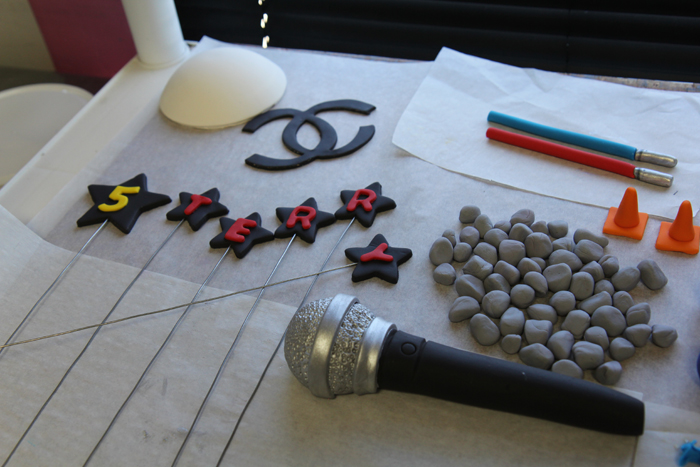 “Things had changed after 9/11, and there was a new wave of fondant and custom cakes,” White recalls. “There was this bakery up for sale and I thought about it. If I buy it, I’m going to be at the shop 24/7 with no salary guaranteed for at least two years.

“I went to my boss, who was the district manager for the supermarket where I worked, and I told her I’m either going to need a raise or I’m going to buy this bakery. And she said, ‘Yeah, right, you’ll never make it. You’ll be back here in two weeks.’ Well, I told her, ‘You said that to the wrong woman.’ That’s when I gave my two weeks’ notice.”

White took out a $50,000 loan against her home, and the bakery owner did a debt buy-back so the deal could be worked out.

“Within three months, I was in the bakery almost 24/7. My sister was the bookkeeper, my mom helped out in any way she could, folding boxes, cleaning everything. My second daughter worked here from age 15 to 27. The first couple years were very rough. I cried a lot. Finally, things started coming together and by the fourth or fifth year, our business tripled.”

Word had spread of her great-tasting cakes and cupcakes and the amazing talents of Kake Korner’s cake decorators. Custom cakes were all the rage, and White excelled at personal service. “I always liked picking up the phone and taking cake orders,” she says. “Now we do nothing but cakes and cupcakes. We used to sell cakes, balloons, chocolates, toys. We redefined how we do things. We focus on buttercreme-based cakes, and we use fondant as accents.”

In 2016, White bought a little “kake car” that became the traveling billboard for the bakery, and it’s already put in 275,000 miles on cake deliveries. She paid $1,500 to have it custom designed.

“All I’ve ever known is that customer service has to be everything. The people who come in here are like my family. A preacher once told me that I have a ‘sweet ministry.’”

When she thinks of all the others, including the young people who struggle with indecision or how to overcome their own obstacles, White can’t help but focus on words of wisdom like “Work your butt off, no matter what.”

“I was on a cake delivery 12 years ago when I stopped at the hospital to see my granddaughter being born,” White says. “The rewards have been great. Great friends. Great customers. I still spend a lot of hours here, and I still mop the floors. I tell my staff, ‘I expect a lot out of you, and I expect a lot out of myself.’ I think getting over all those hurdles, that’s the success. Every day is a new day.”