We use cookies to provide you with a better experience. By continuing to browse the site you are agreeing to our use of cookies in accordance with our Cookie Policy.
Home » First Class Education at Central Milling

Over the next two days, we are about to make Detroit-style, Roman-style, Sicilian and Grandma-style pizzas, followed by a day devoted to breads: Pain à l’Ancienne, sprouted wheat flour and barley batards, sprouted wheat bialys and Struan, a multigrain harvest bread that our instructor Peter Reinhart considers to be the best toasting bread in the world. I can’t wait.

My baking friends Craig Ponsford and Nicky Giusto graciously invited me to participate in two classes taught by Reinhart, a Johnson & Wales baking instructor and author of many wonderful books, including the forthcoming “Perfect Pan Pizza,” due out next year. The setting is Central Milling’s new Artisan Baking Center, a first-class “boulangerie” with top equipment: a Revent rack oven, a pair of LC Bakery Equipment deck ovens, a proofer/retarder and a WP Bakery Group USA mixer.

“This is a magical place for us,” says Arielle Giusto, Nicky’s wife and bakery administrator for the Artisan Baking Center at Keith Giusto Bakery Supply in Petaluma, California.

Nicky Giusto is a fourth-generation miller and baker who grew up in the world of bread. He learned production baking with his uncle, Keith Giusto, and later honed his skills by training with Didier Rosada and Mike Zakowski. He currently works for Central Milling, based in Logan, Utah, developing bread programs and providing technical support for customers, in addition to holding workshops for bakers of all levels. In 2016, he competed at the Coupe du Monde de la Boulangerie on Team USA in the Baguette and World Bread Category. 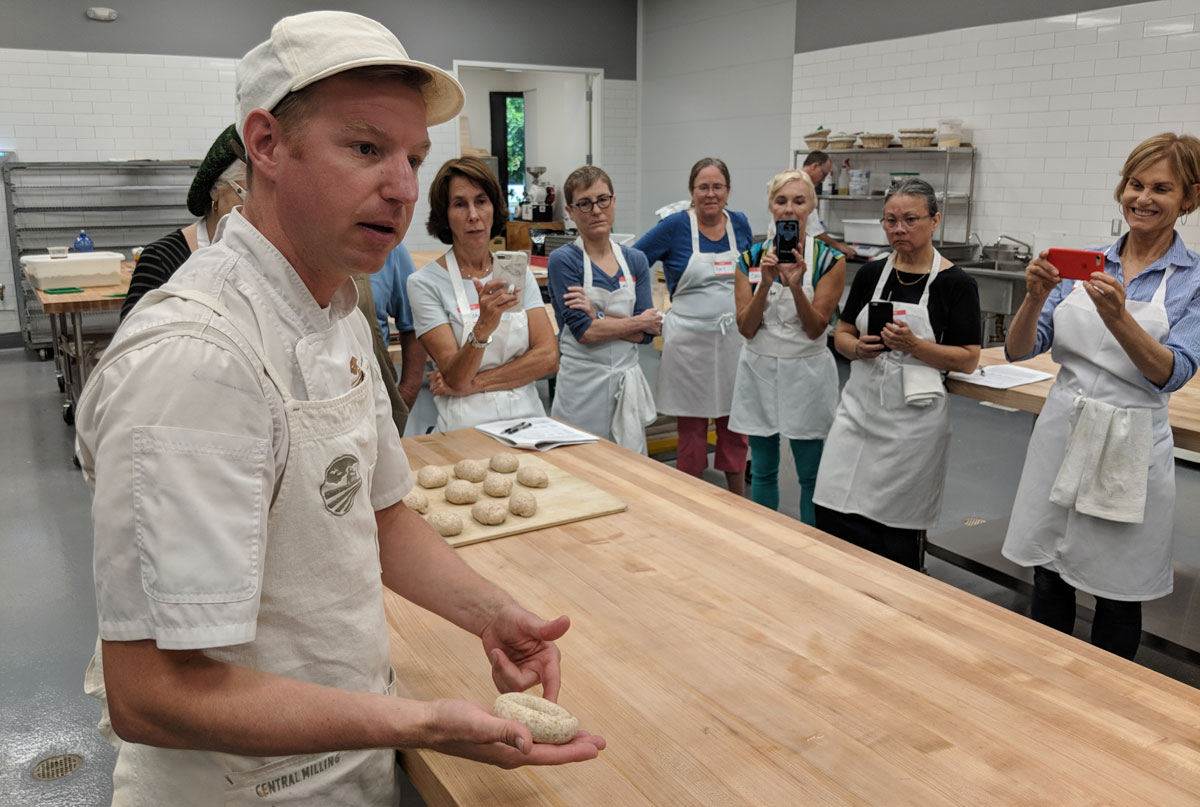 Ponsford further explains that the Artisan Baking Center is geared for professional and home bakers. There are about 10 to 15 classes per month, including upcoming October classes on Advanced Viennoiserie for Professional Bakers with Jeremy Gadouas and a Bread Bakers Guild of America class on Bialys and Farmers Market Breads taught by Zakowski, who runs The Bejkr in Sonoma, California. Gadouas and Zakowski represented Team USA at the 2012 Coupe du Monde de la Boulangerie where the team placed second in the world.

Reinhart is a multiple James Beard Award winner for his cookbooks and is the founder and host of the popular website PizzaQuest.com, where he continues to chronicle his never-ending search for the perfect pizza through videos, essays and recipes.

“There is a new wave in America where Roman-style pizzas are going to be popping up,” he tells our class on the first day. “My goal is it’s all about the crust. An average topping on a great crust can be memorable. Memorable is the key word — that it is so much better than expected you can’t get it out of your head.” 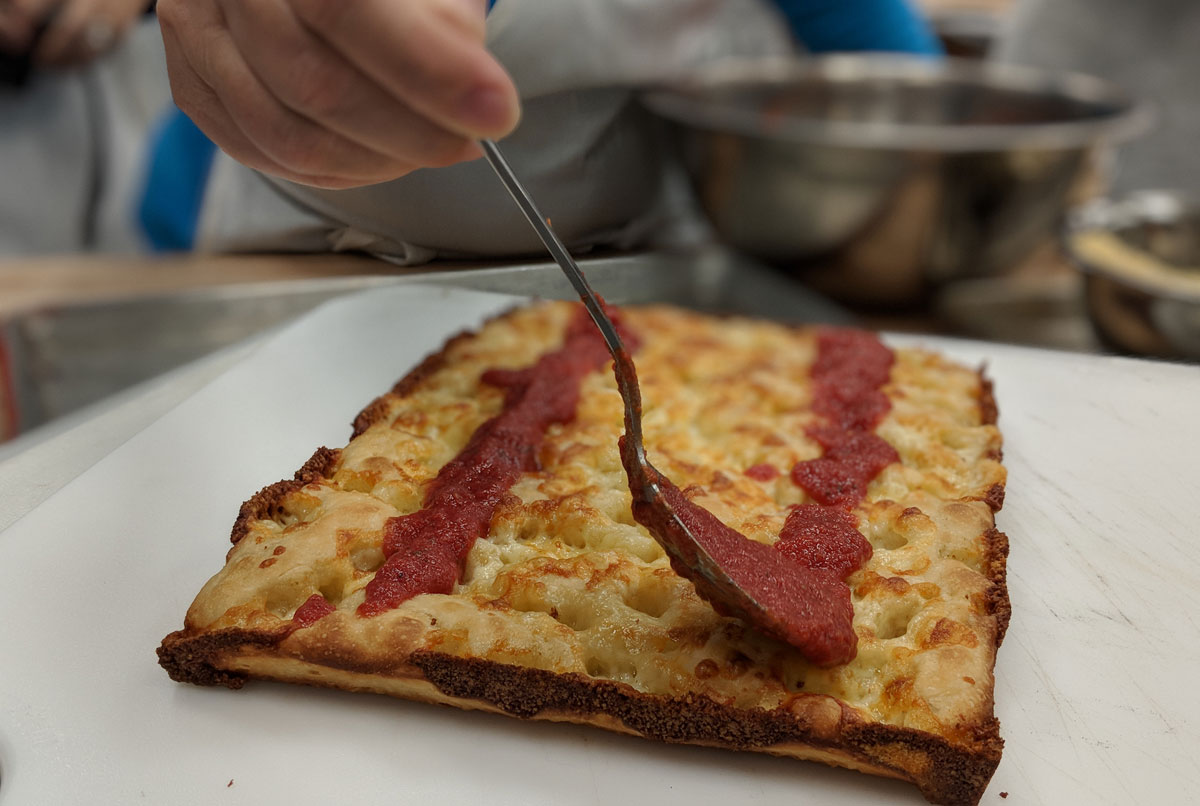 One critical step involves making pizza dough at least 24 hours ahead, so that you are releasing all the flavors through chemistry, he explains.

The Detroit-style red-stripe pizza is a good start, to perfect your system. Five hours prior to baking, begin panning and dimpling the dough at 20-minute intervals in a greased pan using olive oil. After an hour or two, the dough will relax enough to cover the pan after a final dimpling. This is when you spread on top and embed into the dough half of your measured cheese cubes. Rather than grate the cheese, Reinhart says, cut the cheese into cubes so they melt at the right time. After the final dimpling, allow the dough to rise for three to four hours, allowing the dough to bubble up around the cheese.

Doughs for Roman-style pizzas follow a similar method, minus the cheese toppings. The master dough is always made at least one day ahead. Toppings include crushed tomato or marinara pizza sauce, olive oil, coarse sea salt and fresh oregano.

“The simplicity of the toppings, either red or white, not only add their own distinctiveness but, more importantly, allow the complex and deeply satisfying flavor of the crust to take center stage,” Reinhart explains.

“The wetter dough of Roman-style pizza is the secret to why this dough is so good,” he adds. “It allows it to rise with more air pockets. The trick on wet dough is using a lot of oil.”

The formula for great bread

As we move into day two of our first-class education on pizza doughs and breads, Reinhart shares a few thoughts about grains.

“The mission of the baker is to evoke the full potential of flavor trapped in the grain,” he says. “It is my feeling that sprouted grains are going to get bigger and bigger. Sprouting the grain makes the grain taste better, in my opinion. We are right at the tipping point of sprouted grains becoming a bigger part of the American diet.”

Wetter doughs (from 80% hydration are higher) bring a number of benefits to the fermentation process. “More bakers have been pushing the envelope of how much hydration you can get into a dough. 80% used to the threshold. Now it’s only the beginning.” But be careful to watch temperature closely, Reinhart cautions. “Every 17° F will double the rate of fermentation. You don’t want your dough to ferment too quickly, or all the sugar will be used up.”

Managing your dough to achieve desired results requires a balancing act of time, temperature and ingredients.

When producing Khorasan (an ancient grain) bagels, Nicky Giusto explains that you want to set a goal for having a “nice chewy bagel — not too chewy, but chewy enough.”

This goal can be achieved by dipping your bagels into a simmering water/molasses bath for 30 seconds per side (top side down into the water) and return them to a newly prepared baking pan. Add toppings as desired. Place the pan of bagels on the middle shelf of the oven and bake at 426° F (400° F if using convection) for 10 minutes. Then rotate the pan and bake an additional 8 to 12 minutes, until the bagels are golden brown all over. Transfer to a cooling rack.

Reinhart says that bialys are making a comeback in America. He describes them as bagels without the hole. “They have a platform,” he explains. “Now you are seeing a lot of creative fillings. It is a universal product that occurs under a lot of different names in different countries.”

Our class instructor shares another great idea for the best toast you’ll ever enjoy. Reinhart explains a variation of multigrain Struan bread that opens up possibilities for grain variations. Substituting millet, quinoa, amaranth or buckwheat for the corn or oats (or simply adding them to the blend) can be accomplished with a soaked method without precooking the grains. “This bread and its variations make the best toast in the world,” he says. “Because it is sweetened with both honey and brown sugar, it caramelizes quickly, both while baking and especially when toasting. The many grains hold onto moisture so that, while the slices crisp up when toasted, they also retain a moist sweetness.”