Creative confectioneries, decadent desserts and, of course, the Cronut® have arrived at Dominique Ansel Las Vegas at Caesars Palace. James Beard Award-winning pastry chef Dominique Ansel has opened his bake shop and introduced his only-in-Vegas “Lucky 7” collection, Cookie Shots, Frozen S'mores, the Cronut® flavor of the month, and more to the resort.

Dominique Ansel Las Vegas officially opened its doors on Friday, Oct. 21, to excited guests, including the first four customers who drove to Las Vegas overnight from Southern California and lined up at 6 a.m. The first 100 people received a special gift to celebrate the occasion. Chef Dominique Ansel and Caesars Entertainment executives were joined by a traditional Caesars Palace Royal Court procession to unveil the bakery. The group ceremonially toasted with Chef's signature Cookie Shots to commemorate the opening.

“Chef Dominique Ansel is one of the most esteemed pastry chefs in the world,” said Caesars Entertainment regional president Sean McBurney. “The opening of his bakery has been a long time coming. His creations are the perfect addition to our extraordinary culinary offerings at Caesars Palace.”

“I’m so thrilled to finally bring Dominique Ansel Las Vegas to life and have a home here at Caesars Palace,” Ansel said. “We’ve been so honored and humbled to welcome guests from all around the world. For each of our shops, we strive to make each menu unique, and we hope our Lucky 7 pastry collection will bring some good fortune to everyone here. I can’t wait to share what we have planned for our future menu creations.” 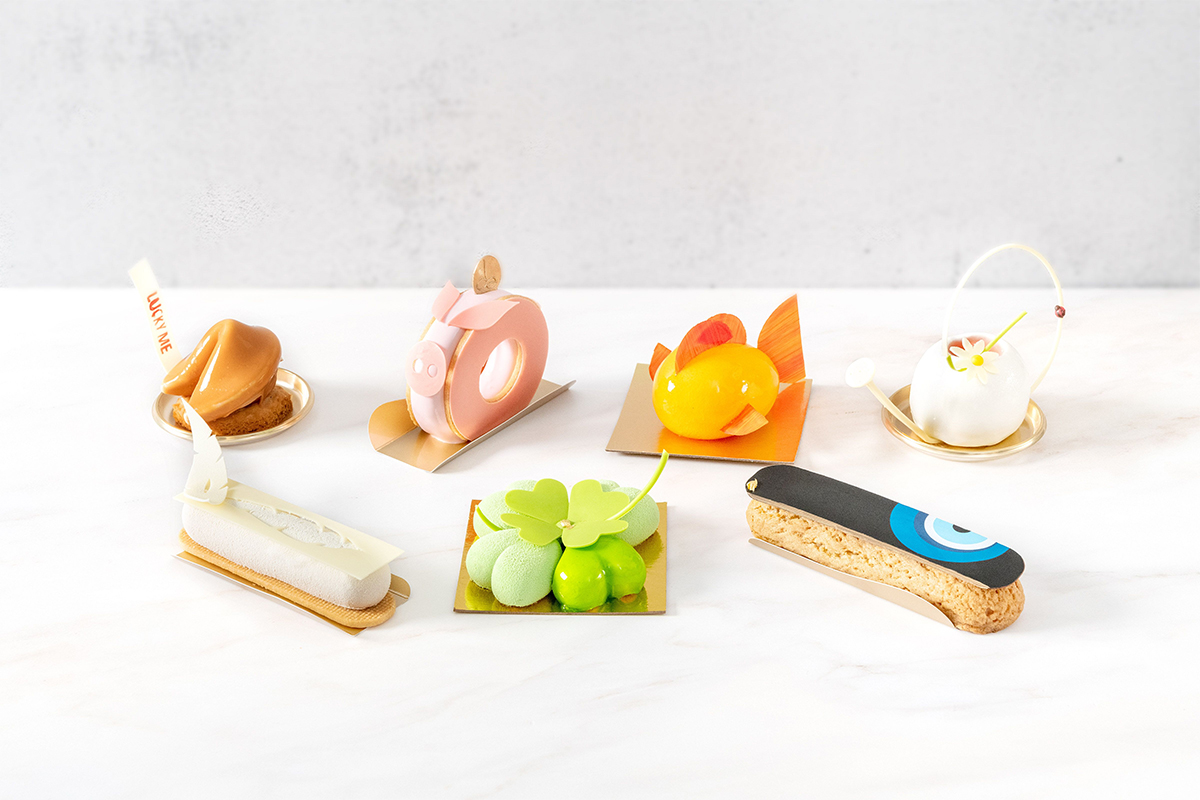 Dominique Ansel Las Vegas at Caesars Palace spans more than 1,100 square feet and features cafe-style seating for 20 people. Open from 7 a.m. to 9 p.m. daily; the bakery is next to Gordon Ramsay Pub & Grill. For more information, visit its website.

James Beard Award-winning Pastry Chef, Dominique Ansel has shaken up the pastry world with innovation and creativity at the heart of his work. Chef Dominique has been responsible for creating some of the most fêted pastries in the world, including: the Cronut® (named one of TIME Magazine's "25 Best inventions of 2013"), The Cookie Shot, Frozen S'more, Blossoming Hot Chocolate, and many more. For his prolific creativity, he was named the World's Best Pastry Chef in 2017 by the World's 50 Best Restaurants awards. Food & Wine has called him a "Culinary Van Gogh" while the New York Post coined him "the Willy Wonka of New York." He has also been bestowed the prestigious l'Ordre du Mérite Agricole, France's second highest honor.

Prior to opening his own shop, Dominique served as the Executive Pastry Chef for Chef Daniel Boulud's celebrated restaurant Daniel, when the team earned its coveted third Michelin star and a four-star review from The New York Times. In 2011, Dominique opened his first shop, the eponymous Dominique Ansel Bakery in NYC's Soho neighborhood, with just four employees. In January 2020, he launched Dang Wen Li by Dominique Ansel in Hong Kong, and most recently in July 2021, he opened Dominique Ansel Workshop, a croissant counter inside of his pastry kitchens in NYC's Flatiron neighborhood. 2022 brought the debut of Chef's first-ever Las Vegas location, Dominique Ansel Las Vegas at Caesars Palace, which opened in October. Dominique is also the author of two cookbooks: Dominique Ansel: The Secret Recipes (October 2014), and Everyone Can Bake: Simple Recipes to Master & Mix (April 2020).

Birthplace of the Cronut 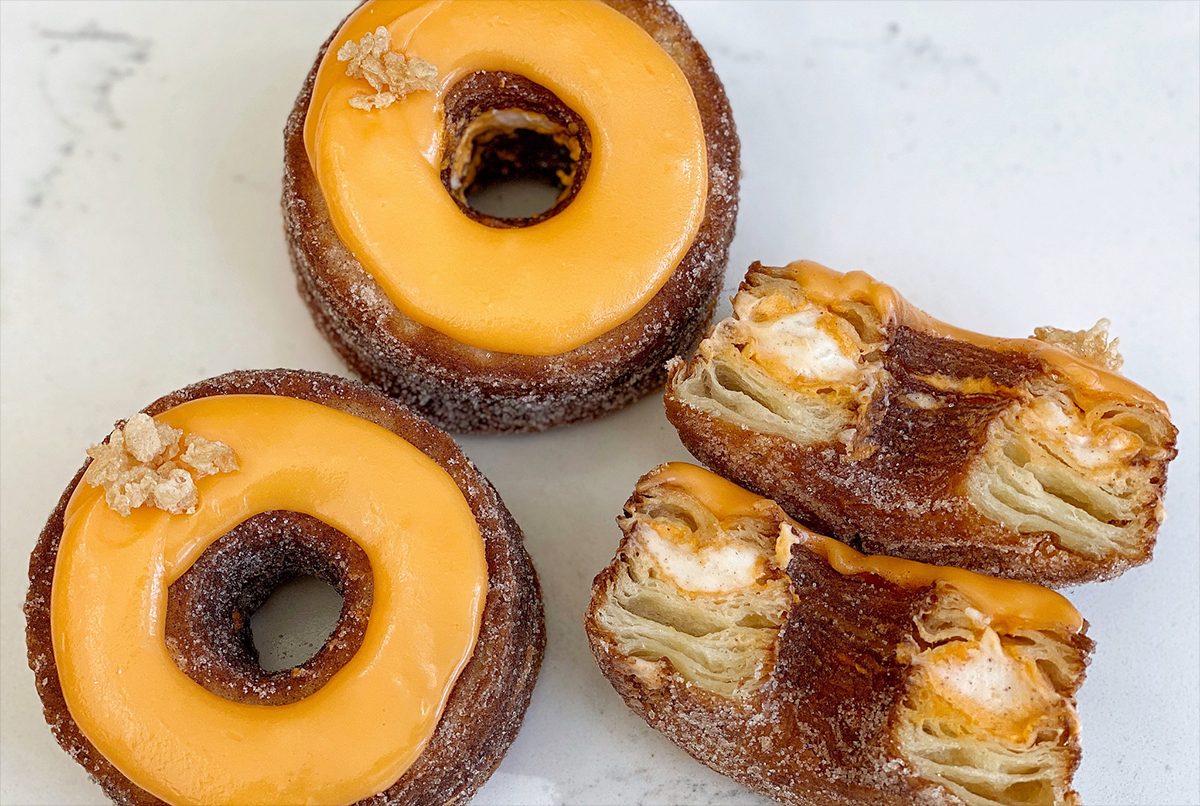 In 2023, the much-heralded Cronut will celebrate its 10th birthday, marking a special occasion for one of the most famous bakery items in retail bakery history.

French-born Dominique Ansel arrived on the American scene where he was invited to join restaurant Daniel in 2006 by Daniel Boulud, where he served as the executive pastry chef. During his near six-year tenure at Daniel, the restaurant won its first 3-star Michelin rating, a 4-star New York Times review, and James Beard’s Outstanding Restaurant of the Year Award in 2010.

In an exclusive interview with Bake magazine at the time,, Ansel shared the background of his inventive pastries. “I was trained for six years in France, just in lamination,” says the executive pastry chef who opened Dominique Ansel Bakery in October 2011. “One of the best ways to get a job in France was to say on your resume that you do lamination.”

Practice makes perfect, and Ansel perfected his newest creation in May 2013 when he introduced a croissant/donut hybrid that he coined the Cronut. Within hours, photos of the Cronut went viral in the social media sphere (more than 140,000 links, and news soon reached Yahoo’s homepage for millions of viewers). The popularity grew so quickly, Ansel decided to trademark the Cronut name.

The Cronut is not simply croissant dough that has been fried. Made with a laminated dough similar to a croissant (but with a different ratio of ingredients, different thickness, and different number of folds), the Cronut is first proofed and then fried in grapeseed oil at a specific temperature.

Each Cronut is flavored in three ways: rolled in sugar, filled with cream, and topped with glaze. Cronuts are made fresh daily, and completely done in house. Cronuts have a short shelf-life (about 6 hours) and should not be refrigerated.

Cronut mania soon took New York City by storm, which led to appearances by Ansel on Martha Stewart’s Sirius radio program, The Huffington Post, CNN, and Live with Kelly Ripa & Michael Strahan. Said Ripa of her experience witnessing the crowds waiting to taste Ansel’s Cronut: “I thought it was the line to the Apple store.”

“I didn’t think it was going to go that big,” Ansel said at the time, acknowledging that the Cronut was simply a replacement item for another product that wasn’t selling as well. “The second day we made 100 Cronuts and we sold out in one hour. Now, we make a couple hundred every day and still don’t have enough. We open the door at 8 a.m., and we have 100 people waiting outside the door. It’s been amazing.”