We use cookies to provide you with a better experience. By continuing to browse the site you are agreeing to our use of cookies in accordance with our Cookie Policy.
Skip To Content
Home » Peter Reinhart discusses how to create the perfect pan pizza

Peter Reinhart discusses how to create the perfect pan pizza

Peter Reinhart wants to raise the bar for pan pizzas.

During a recent class at Central Milling’s Artisan Baking Center, the Johnson & Wales University baking instructor provided a special sneak preview of recipes from his next book (due out in May), demonstrating why pizzas baked in pans are the hottest trend these days in the pizza world.

Generally, there are five characteristics of Detroit-style pizza: baked in a square or rectangular pan, frico crust, crispy bottom, airy middle and stripes of sauce on top. A crunchy frico crust is formed by adding chunks of cheese to the dough prior to baking.

“We all grew up with Americanized Neapolitan-style pizza,” Reinhart explains. “Detroit-style, when done well, is equally great. This is probably the one you should start with, just to perfect your system and determine how your oven and baking shelf best needs to be set.”

To make a Detroit-style “red-stripe” pan pizza, you’ll need any master dough (always made at least one day ahead), 12 to 24 ounces of brick cheese, mozzarella, muenster, fontina or provolone, 1 to 2 cups of pepperoni, and 1 cup crushed tomato pizza sauce or marinara pizza sauce.

Five hours before baking the pizzas, begin panning and dimpling the dough in at least 20-minute intervals in a greased pan, using olive oil or an olive oil and melted butter combination. After the first hour or two, the dough will have relaxed enough to cover the whole pan after a final dimpling. During the final dimpling, spread on the top and embed into the dough half of the measured cheese cubes. 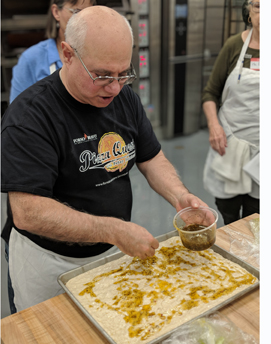 “Rather than grate the cheese, we find it better to cut it into cubes. Then the cheese melts at the right time,” he says. “A lot of pizzerias are doing a blend of Jack cheese with cheddar. The secret to good Detroit-style pizza is the frico — a cheesy, crackery crust.”

When ready to bake, cover the top with about eight pepperoni slices and cover the surface with the remaining cheese, especially focusing around the outer edge and perimeter of the dough. This will create the frico. Distribute additional pepperoni slices over the layer of cheese.

Bake on the middle shelf of your oven for 8 minutes and then rotate the pan 180 degrees and bake for an additional 7 to 9 minutes, or until the cheese caramelizes to golden brown on the surface.

The under-crust should also caramelize to a rich golden brown, and the outer walls should form a dark brown, thin, crispy cheese crust. The key is to have the under-crust of the dough become crisp and golden at the same time as the cheese on top caramelizes.

Once it is done, transfer the baked pizza to a heat-proof counter and remove the pizza from the pan by first tracing around the perimeter (between the crust and pan wall) with a rounded pallet knife or metal spatula. Lift the pizza and slide it on to a cutting board. Use a spoon or squirt bottle to drizzle two to three stripes of pizza sauce across the top and cut the pizza into squares.

In pursuit of the perfect crust

Deep pan pizzas need to be at least 2-inches tall, and Reinhart recommends the importance of having both a “visual note and a flavor note.

“A lot about pizza is emotional,” he says. “People have an emotional connection to pizza that often transcends the style. My goal is all about the crust, and memorable is the key word. You want the crust to be so much better than expected that you can’t get the thought out of your head.”

Reinhart is a baking instructor at Johnson & Wales University. He was the co-founder of the legendary Brother Juniper’s Bakery in Sonoma, California, and is the author of five books on bread baking, including Brother Juniper’s Bread Book and the modern classic The Bread Baker’s Apprentice, which was named cookbook of the year in 2002 by both the James Beard Foundation and the International Association of Culinary Professionals.

Reinhart lives with his wife, Susan, in Charlotte, North Carolina. 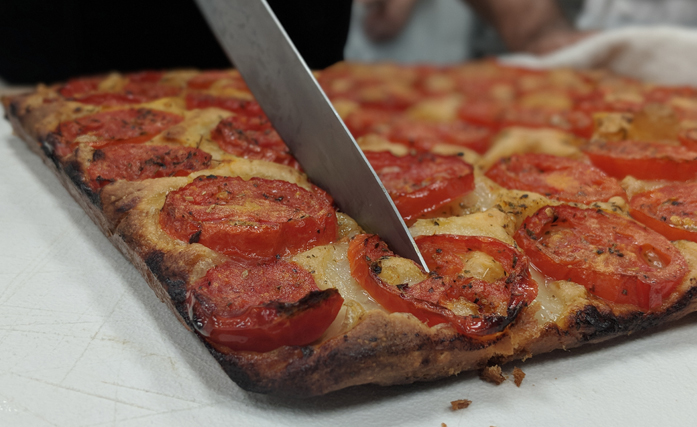 A 100% white flour pizza crust is the most popular, he says, but the country style and the sourdough are growing in popularity as interest in whole grain baking, as well as sourdough, increases. Reinhart suggests to first master the white flour dough and then branch out and try others.

In a mixing bowl, stir together unbleached bread flour, kosher salt and instant yeast. Add all the water (80% hydration) and stir with a large spoon or mix on slow speed to form a course, shaggy dough.

Add the oil. Increase the speed to medium and mix for another 30 to 60 seconds to make a wet, coarse sticky dough. Let the dough rest for 5 minutes to fully hydrate. Increase the mixer to medium high speed and mix for another 30 seconds to make a smooth, sticky dough. It should be soft, sticky to the touch, and offer a little resistance when pressed with a wet finger.

Use a teaspoon of olive oil to make a 15-inch diameter oil slick on the work surface. Rub some oil on a plastic bowl scraper and on your hands and use the scraper to transfer the dough to the oil slick. Stretch and fold the dough. Cover the dough with a bowl and let it rest for 2 to 5 minutes.

When you add a small amount of whole grain flour, Reinhart explains, whether whole wheat or rye, it adds a more complex, earthy flavor without making the crust seem heavy or dense. “I found that the magic number for an excellent pizza crust that really feels like it’s featuring the whole grain and not just tipping its hat, is 25% whole grain flour to 75% bread flour,” he says.

Sourdough is growing in popularity because of its flavor, Reinhart adds, but also because recent research reveals that naturally fermented dough (especially fermented over a long period of time) is easier to digest. Making your own sourdough starter requires a little time and patience, he says. It is not difficult to maintain the starter with periodic feedings.

Other types of pan pizzas 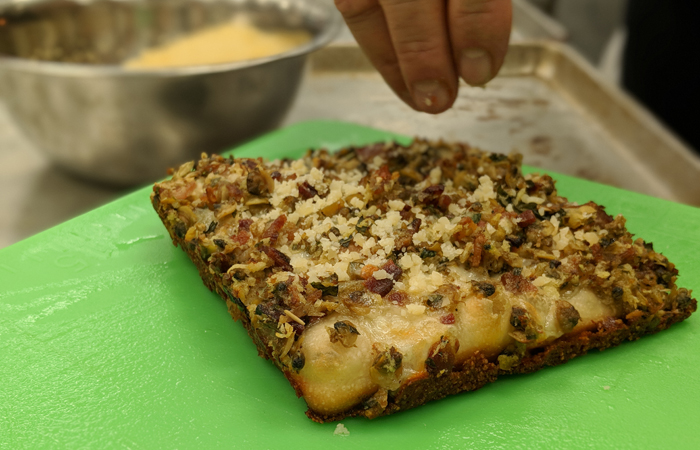 Roman-style red and white pizzas are memorable by how amazing the dough tastes when properly fermented and hydrated, and then baked in a hot oven, Reinhart says. The simplicity of the toppings (either red or white) not only add their own distinctiveness, but more importantly allow the complex and deeply satisfying flavor of the crust to take center stage.

Grape and anise schiacciata pizzas are bursting with flavor, and this fruited pan pizza is best when baked in round cake pans, Reinhart says. The tall side walls of the pans are more conducive than sheet pans to containing and enveloping the sweet, juicy grape and anise filling.

Umberto’s-style grandma pies are popularized by Umberto’s in Queens, New York. According to Reinhart, the main difference between a grandma and a Sicilian pizza, by some definitions, is that the grandma pizza is baked just once with all the toppings on board — and not par-baked and then topped. “This does create some challenges,” he says, “such as getting the crust to finish baking at the same time as the toppings.” This is achieved by using less dough, layering the sliced cheese over the surface, not overloading the pizza with too much sauce, and baking at a slightly lower temperature and on a lower shelf in the oven.

White clam casino pizza is a favorite of Reinhart’s, whether it’s Frank Pepe’s New Haven Neapolitan pie or the original Sicilian variation created for Reinhart’s book. “When I was a kid, my dad’s favorite appetizer was something called clams casino, which consisted of whole or chopped clams, herbs, bacon crumbles, a shot of Tabasco and a small amount of seasoned bread crumbs,” he explains. “Everything was packed into a half shell, baked or broiled and then slurped with great gusto. Had I known how to make this Sicilian clam pizza when my dad was alive, I think he would have flipped over it. This one is for him.”

Available this May and published by Penguin Random House, Perfect Pan Pizza is an in-depth guide to pan pizza from baking authority Peter Reinhart, including achievable recipes for making Detroit, Sicilian, and Roman-style pan pizzas and focaccias in a home oven.

The book is a lushly photographed ode to the pan pizza, a doughy, crispy, crowd-pleasing version of everyone’s favorite food that is easy to make in a home oven without specialty equipment like stones and peels. Starting with recipes for three master doughs that can be made with commercial yeast, as well as a brief intro to sourdough starters, Perfect Pan Pizza illustrates how to make several styles of pan pizza including Detroit-style “deep pan” pizza, focaccia and schiacciata, and Roman and Sicilian styles through step-by-step photographs.

The pizzas include classic toppings like pepperoni and mushrooms, as well as an exciting variety of recipes like the sandwich-inspired Philly-style Roast Pork and Broccoli Rabe; Reuben pizza; Bacon and Egg with Tomato and Arugula Pizza; Blue Cheese, Balsamic Onion Marmalade, and Walnut Focaccia; and Rosemary Garlic Potato, Baby Kale, and Prosciutto Pizza Al Taglio.

With unique recipes, plenty of informative FAQs for beginners, and a permissive and inspiring tone, this book will appeal to both experienced bread bakers and novice home pizza makers alike.