The ancient grain revival in America

“Right now, I’m getting durum flour from Sicily (Italy) from a third-generation miller,” says Golper, a three-time Outstanding Baker nominee by the James Beard Foundation. “It’s milled from an ancient variety of durum. It’s like a newfound love.”

Filippo Drago, the miller from Sicily, supplies the durum flour to the US market through specialty ingredients importer Gustiamo US, based in the Bronx, New York. According to Gustiamo, Filippo Drago’s Castelvetrano flour is a blend of stone ground grains, made without any part of the grain kernel removed; all the grain’s bran, germ, and endosperm is skillfully milled into a beautiful homogeneous flour. The result is a flavorful flour that produces bread and baked goods with natural flavor hints of cinnamon and nutmeg.

In addition to Pane Nero, this flour is well suited for pizza, biscotti and focaccia. It can be mixed with other flours to give the hearty, lightly sweet taste of Tumminia, the name of the heirloom breed of durum wheat. Drago is respected throughout Sicily for making Pane Nero di Castelvetrano according to traditions, including baking the bread in an oven burning 100% olive tree wood.

Zingerman’s Bakehouse in Ann Arbor, Michigan, is another big fan of the flour, used to make its own Pane Nero. Drago is stone milling the organic durum wheat at his mill, Molini del Ponte. “What he makes is to standard flour as farmstead cheese is to Kraft singles. Its texture is coarse, the color is light, speckled yellow, and there’s a slight sweetness to it,” according to Zingerman’s. When used in baking, like the Pane Nero bread made by the bakers at Zingerman’s, it results in a dark brown loaf with a dense, compact crumb.

“Grains are the staple of civilization,” Golper says, as he continues a conversation about the importance of bakers connecting to the land and the farmer.

Bien Cuit’s method of small batch mixing ensures bakers give each loaf the same level of attention that a baker would have hundreds of years ago when mixing was done entirely by hand. They pair this technique with slow fermentation, which requires 16 to 68 hours for each loaf.  More control over gluten and fermentation ensures their bakers can balance acidity and maximize the taste and texture of every loaf. 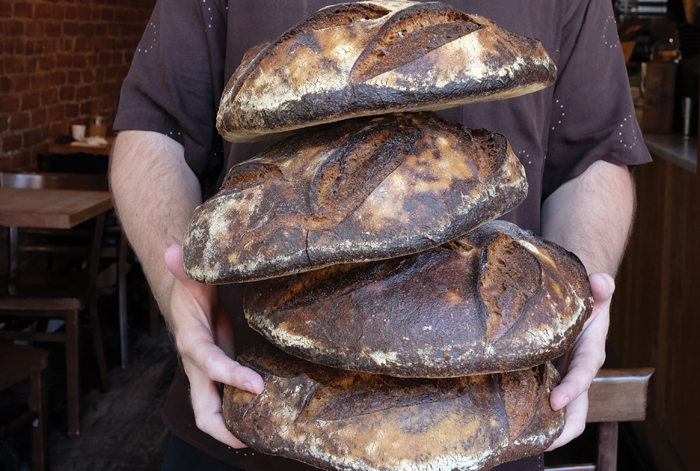 “The bakery has traditionally been at the heart of each community,” Golper says. “With a single oven baking for the entire village, it has been a place for people to gather and connect through a common food. We feel it is our responsibility as artisan bakers to maintain this age-old tradition and to offer our own local community the best breads and pastries possible.”

For this reason, Golper is one of the few craft bakers in America working in tests with Kernza grain, the perennial wheatgrass being developed by The Land Institute in Salina, Kansas.

The Perennial restaurant in San Francisco serves “warm Kernza bread” for $5 on its dinner menu, and Golper did a lot of research for them to “figure out how to ferment it deeply. It’s very dense.

“I just want them to be successful,” Golper continues. “This is how we begin to support alternative agriculture with positive results. I’ve never worked with a grain like Kernza. It’s beautiful, and it’s difficult.”

Although Kernza grain has made its way into the commercial supply chain in small niche markets, the goal of The Land Institute is to develop varieties of Kernza that are economical for farmers to produce at large scale. The breeding program is currently focused on selecting for traits including yield, shatter resistance, free threshing ability, seed size and grain quality. Within the next 10 years, the Land Institute aims to have a crop with seed size that is 50% of annual bread wheat seed size. Long-term goals include developing a semi-dwarf variety and improving bread baking quality.

In 1983, using Wes Jackson’s vision to develop perennial grain crops as inspiration and guidance, plant breeders at the Rodale Institute selected a Eurasian forage grass called intermediate wheatgrass, a grass species related to wheat, as a promising perennial grain candidate. Beginning in 1988, researchers with the USDA and Rodale Institute undertook two cycles of selection for improved fertility, seed size, and other traits in New York state.

The Land Institute’s breeding program for intermediate wheatgrass began in 2003, guided by Dr. Lee DeHaan. Multiple rounds of selecting and inter-mating the best plants based on their yield, seed size, disease resistance, and other traits have been performed, resulting in improved populations of intermediate wheatgrass that are currently being evaluated and further selected at The Land and by collaborators in diverse environments.

“No tilling is a beautiful concept; it’s almost like recreating the prairie — putting health into the soil. Kernza seems to taste different everywhere you grow it,” Golper says. “It’s going to taste different based on the soil it’s coming out of.”

Experiments are underway to pair Kernza with legumes in intercrop arrangements that achieve greater ecological intensification, and to utilize Kernza as a dual-purpose forage and grain crop in diverse farming operations. “I love working with The Land Institute,” Golper says. “They are breeding around the clock, and they have something already viable as something to eat. But they have to iron out the wrinkles before it’s financially viable. Bakers get excited about the future of food that is truly sustainable. But it takes time.”