We use cookies to provide you with a better experience. By continuing to browse the site you are agreeing to our use of cookies in accordance with our Cookie Policy.
Home » Recent survey finds top holiday pie in every region of America

A recent survey of over 1,500 Americans by GE Appliances has discovered regional preferences for holiday pies, just in time for Thanksgiving celebrations on Thursday, November 22. 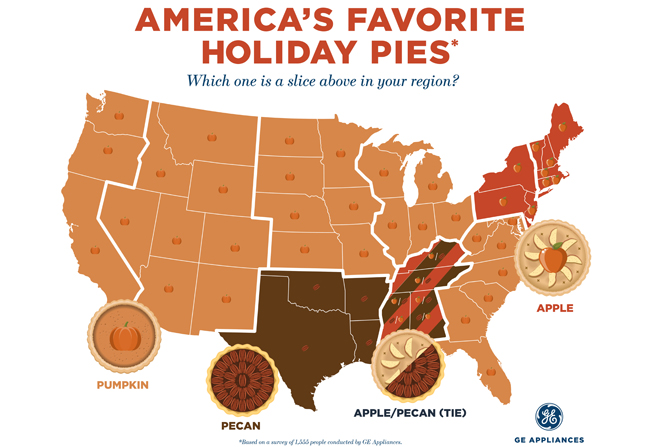 The one region of the country that is split on pies is the East South Central states of Alabama, Kentucky, Mississippi, and Tennessee. These four chose both apple and pecan pie as the best selection.

Pie in an integral part of the holidays, and each state has its own pie traditions that go beyond these top three flavor choices. For example, Florida is known for its key lime pie; Indiana specializes in the Hoosier Sugar Cream Pie made with pantry staples such as sugar, cream, flour, and vanilla; and, Maine is home to wild blueberries so it offers great versions of the iconic blueberry pie.