We use cookies to provide you with a better experience. By continuing to browse the site you are agreeing to our use of cookies in accordance with our Cookie Policy.
Home » Election Cakes sweeten the election season

Historians and culinary enthusiasts have something in common when it comes to this time of year. With the general election set to take place in less than a month on Tuesday, November 3, now is as good a time as any to look at one of the desserts that has defined election season throughout American history.

Election cakes date back to Colonial America and the young Republic. In our country's infancy and with the fight for our independence just behind us, elections were held with utmost importance. To help encourage citizens to vote and participate in our democracy, naturally-leavened cakes, in different interpretations within different communities, were commonly served at town hall meetings. They came to hold a significant place in the landscape of voting places at that time.

Today, nothing has changed when it comes to the importance of elections. It is our right and our duty to participate in this process, and many US citizens work tirelessly to encourage this participation. Sometimes that can even involve bringing back a little piece of history. 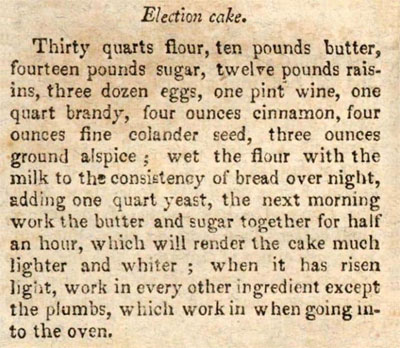 In 2016, Old World Levain (OWL) Bakery asked its fellow bakers to dust off a tradition for that year's elections. The Asheville, North Carolina bakery encouraged others to “Make America Cake Again” in a social media campaign. OWL Bakery was joined by others nationwide to sweeten up the season by baking and selling election cakes.

The non-partisan nation-wide project looked to raise awareness about America’s culinary heritage and the place of food in political and social life as well as to generate funds for voting access and rights. A percentage of proceeds from the sales of those election cakes was donated to the League of Women Voters, a non-partisan non-profit organization that works on voting access, education and policy.

As our next election approaches, these cakes can be an opportunity to bring attention to issues concerning voter rights and access, as well as to connect our shared history through food.

For those interested in trying the Election Cake recipe for themselves, you can find a bakers formulation here and an adaptation for home bakers here.