We use cookies to provide you with a better experience. By continuing to browse the site you are agreeing to our use of cookies in accordance with our Cookie Policy.
Home » Seasonal Sweets at a New York Bakery

An impressive seasonal menu of half moon cookies, jelly buns, Dutch almond bankets and much more keeps the crowds rolling into Holland Farms Bakery & Deli, an iconic bakery in the upstate New York village of Yorkville, near Utica.

Marolyn Wilson, who runs and owns the bakery with her sister, Suzanne Harrington, recalls that back in 1982, when business was slow during the first quarter, she suggested a creative promotion for jelly buns. Soon came production of a television commercial, proclaiming February as Jelly Bun Month and featuring local celebrities tackling the question: How do you eat a jelly bun?

“It’s been an amazing promotion. We went from selling 20 dozen a day to 250 dozen a day,” she says. “Every year, people line up on Feb. 1 before the commercial airs. Everybody in town talks about it.”

Another seasonal favorite arrives on Dec. 15 and lasts for a month. Dutch almond letters and pastry sticks — known as bankets — are immensely popular at this time of year because, as anyone from Holland will tell you, these almond flavored pastries are a delicious holiday treat.

The Yorkville bakery makes Dutch almond letters and sticks by forming a log of almond paste filling and then blanketing the filling in buttery pastry dough. They either leave them as a stick or form them into letters. To finish, they bake the flaky pastries to golden brown. The holiday treats can be served right away or can be frozen and enjoyed later.

And, yes, Holland Farms ships Dutch almond bankets across the country through a convenient online ordering system on its website, hollandfarms.com. In addition, customers can order Holland Farms’ signature half moon cookies online: a dozen for $44.95 or 18 cookies for $64.95. 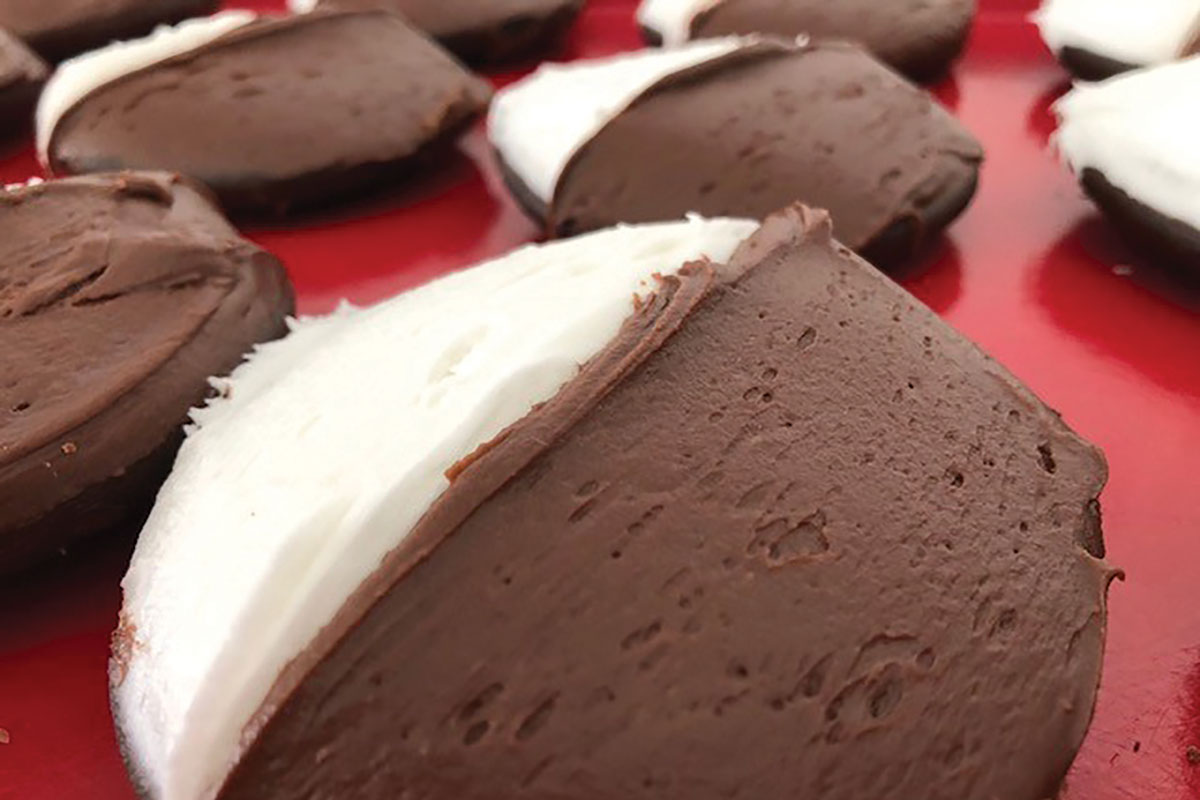 Half moon cookies are similar to the famous black-and-white cookies that reportedly originated at Glaser’s Bake Shop in the New York City neighborhood of Yorkville. The black-and-white cookie — actually, a drop cake that is frosted in chocolate on one side and vanilla on the other — was one of the original recipes that German immigrant John Herbert Glaser used when he opened the bakery in 1902, according to the bakery. Unfortunately, Glaser’s closed its doors this summer on July 1.

“As the cookies moved upstate, they got softer and softer,” explains Holland Farms’ Wilson. “Ours are more cakelike, with chocolate and white frosting.”

Additionally, the bakery creates other flavors of half moons for special occasions: dressed in red for Valentine’s Day, wearin’ the green for St. Patrick’s Day and frosted in pretty pastels for Easter. New flavors include carrot with cream cheese, pumpkin and red velvet.

“Every spring, we spend about two months promoting March Moon Madness, and we sell 60,000 half moons in a month,” Wilson says.

Holland Farms is truly a family business that survives through hard work and innovation. Wilson’s niece, Heather Potrzeba, who is general manager, represents the third generation. Today, the company has 80 employees, including 13 in the bakery department. 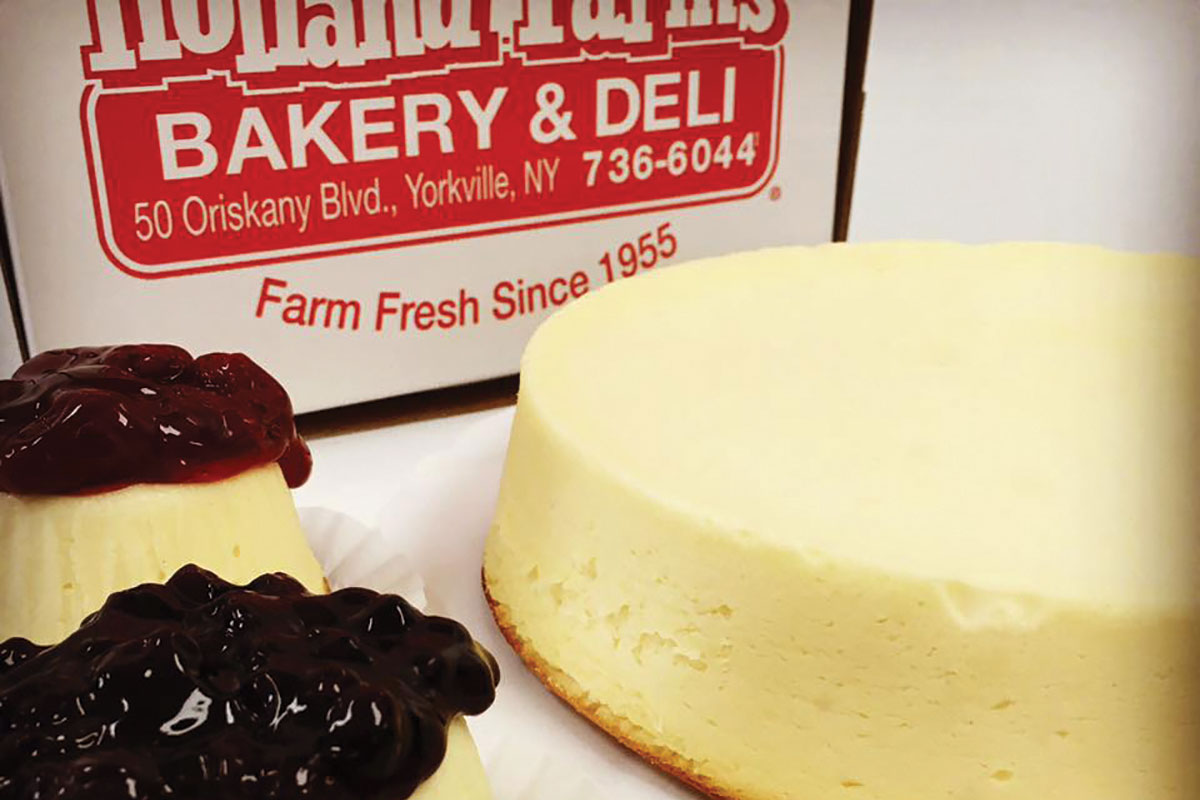 Wilson explains that her grandparents came to the United States from Holland, and their son (Wilson’s father), John Piersma, the entrepreneur of the family, started the first Holland Farms door-to-door milk delivery in 1928. He was joined by his new bride, Evlyn, in December 1933.

John and Evlyn each had their own truck and delivery routes, serving downtown Utica and surrounding areas. Evlyn gave up her route in 1940 to start a family, but milk delivery continued throughout World War II with help from John’s four brothers. Sid took over the milk bottling production, Pierre drove a milk route, Herman ran the family’s dairy farm, and Jacob bought and ran a second dairy farm. By 1950, Holland Farms had four men delivering milk to residences, businesses and hospitals six days a week.

Five years later, John Piersma opened Holland Farms Dairy Bar and Bakery on the triangle in Yorkville. Since 1980, Holland Farms Bakery and Deli has been owned and run by Harrington and Wilson.

The bakery sells donuts, cakes, pies and pastries, which are all made from scratch. According to the New York Bakers Association, Holland Farms is a unique operation in New York because the bakery produces more “hand made” baked goods in one location than any other bakery in the state.

Holland Farms has faced numerous competitors from in-house bakeries of the large grocery stores that have arrived in the Mohawk Valley, and still fared quite well, Wilson says. 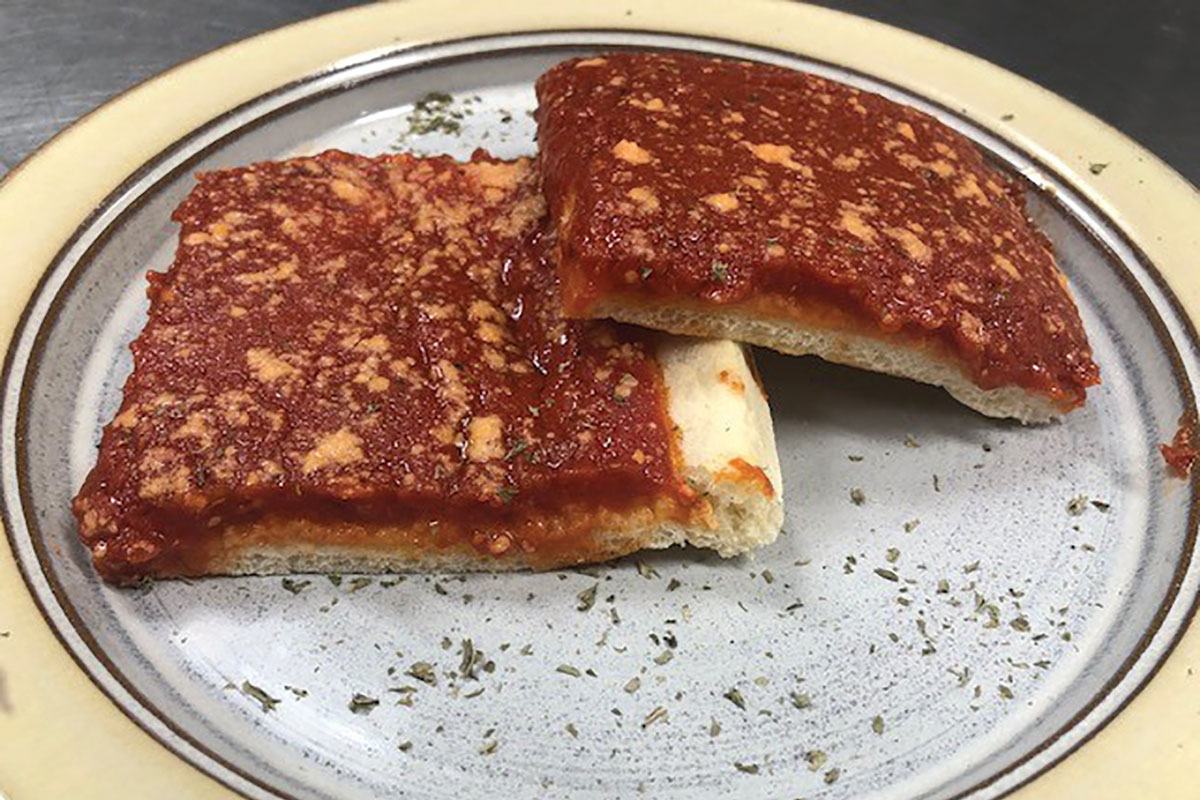 Beyond its popular baked goods, Holland Farms also operates a full-service deli and features daily specials, sandwiches, soups, salads and more. And the bakery prides itself on yet another delicious item unique to the central New York region known as tomato pie.

Tomato pie—at least the version that is popular in the Northeast—includes pizza dough topped with tomato sauce and grated cheese that is baked in a full sheet pan and then served cold. A favorite at many of the Italian bakeries in the Utica area since the early 1900s, tomato pie debuted at Holland Farms about 20 years ago when Ramon Zayas, the bakery’s former production manager, started working at the bakery and brought his recipe with him.